"State Of Decay", also known as "Episode 6" is the first episode of Thunderslate's Into The Fray: Season Two.

Vince and Wyatt scour a museum for supplies. After gathering some, they run into some walkers and plan to make their escape. Becca and Annie, who were waiting outside, go to look for them but only succeed in finding a herd of walkers. Vince and Wyatt make their way through the herd and the latter starts the truck while Vince and Becca fend the dead off. Becca accidentally shoots Vince but the entire group escape.

The group stops at a gas station to refuel, where they are captured by strangers. The strangers bring them in and one of them goes to get the rest of the group. A man named Sullivan appears, annoyed at what the group leader, Fuad, has done to Vince's group. The other group members, Kiff, Emily and Mitchell soon show up and the group decides to put the fate of Vince's group and their supplies to a vote.

The group is accepted and Sully tries to help them settle in. In the morning Vince's wound is checked on by Emily and he is later told to go with Fuad. They go to a clearing where Fuad points his rifle at Vince's chest and confesses that he believes him to be a threat. A walker tries to attack Fuad but Vince saves him with the use of a concealed pistol, though showing the weapon only exacerbates the situation as Vince and Fuad end up in a standoff.

Becca tries to ask Emily whether Vince is okay but she gets no answer. She tries to follow Emily but ends up on the roof where Mitchell is. The two talk for a while until Mitchell spots Vince and Fuad are aiming weapons at each other through his binoculars. Wyatt, Sully, Kiff, Emily, Becca, Mitchell and Annie all run into the woods to see what is going on but they run into walkers on the way. Mitchell ditches the group and they have to fight their way through.

Annie ends up on her own after the group is split up. She sees Wyatt and he beckons her over to him but she has to choose between running to him or saving Sully who is being attacked by walkers. 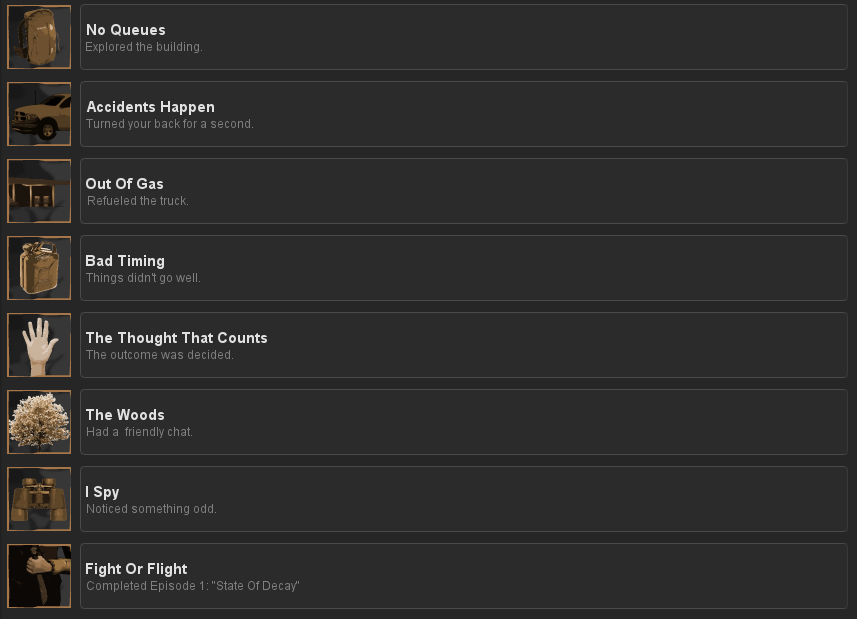 Retrieved from "https://twdgff.fandom.com/wiki/State_Of_Decay?oldid=6256"
Community content is available under CC-BY-SA unless otherwise noted.